Anna Scott: “Signed by the author, I see.”
William Thacker: “Yeah, couldn’t stop him. If you can find an unsigned one, it’s worth an absolute fortune.”
– Notting Hill, 1999

It’s an odd thing, the signing of books. It’s not enough to meet the author, to hear him read excerpts from his work, to see him in the flesh, in all his awkward, disheveled glory (no, not you, Jonathan Franzen; you’re pretty, so relax). It’s not enough that the author has already poured his soul and quite possibly several kegs of wine into his work. The reader wants more. The reader wants the voodoo of the signature, a piece of the author himself, a personal dedication, a pledging of his troth that this work, this mass-produced work, was in fact produced just for you.

From a writer’s point of view, there’s no greater compliment than a reader asking you to deface her book.

When last I wrote about my two book launches, I was fretting that my jokes would crash to the ground like lifeless unfunny birds. I won’t lie; there were casualties. In Quebec City, about 40 strangers gathered to hear me read and watch me run around the room high-fiving the audience to wild applause (that I had requested they provide on cue). The fact that people didn’t run screaming for the exits and in fact stood around to purchase books and then have me desecrate said books, well, it felt all right.

Or at least it did at the time.

Then, on the drive back home, it hit me: what if it wasn’t just me?

I had already invited a musician to perform. What about that piece about the conversation I had with my daughter? What if Abby actually read it with me? And the other dialogue, the one about the imaginary conversation at Canada Customs. What if I had my friend Annie read that one with me?

And so, this past Saturday, in front of about 40 friends, associates, people I knew, people I could not run away from forever, I quite literally straddled the Canada-U.S. border in the Haskell Free Library and, with the help of said friends and family, I oversaw a pretty wonderful afternoon of words and music and cupcakes and wine and amazement that a public building built on “the line” can still exist at all. It was a relief sharing the stage. Sure, there were feathers all over the place, but I realized, particularly later when I saw the photos, that I truly was among friends. I realized too that writers, readers, family, friends, countries, none of us are isolated, no one goes through this alone, but we are all intertwined and, what’s more, really, really need each other.

Afterwards, I sat and chatted and signed a bunch of books. And with this signature, we made our pledge… 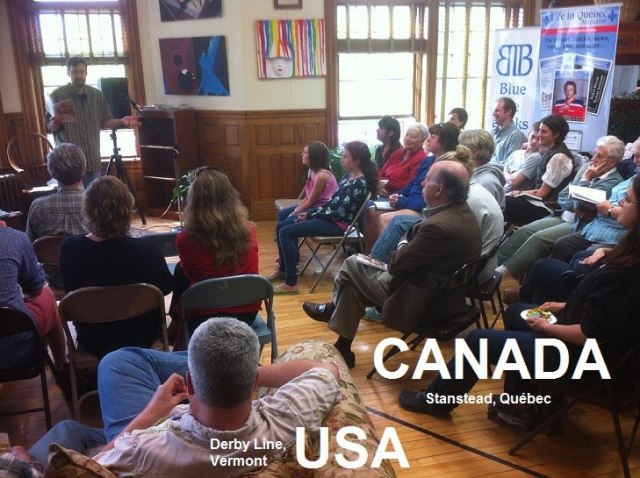 The publishers described it as an “international book tour.” 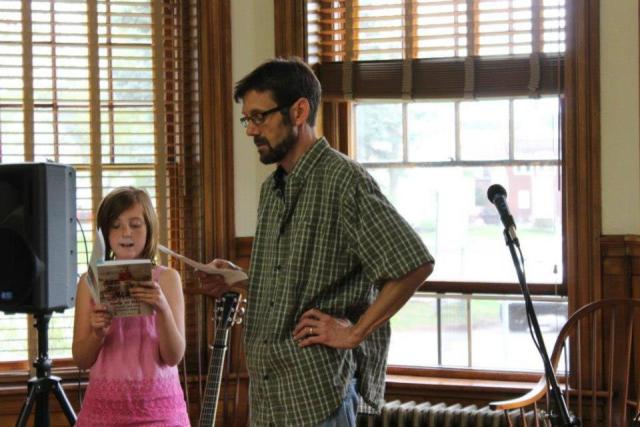 Abby joins me on stage, where she read like a boss! 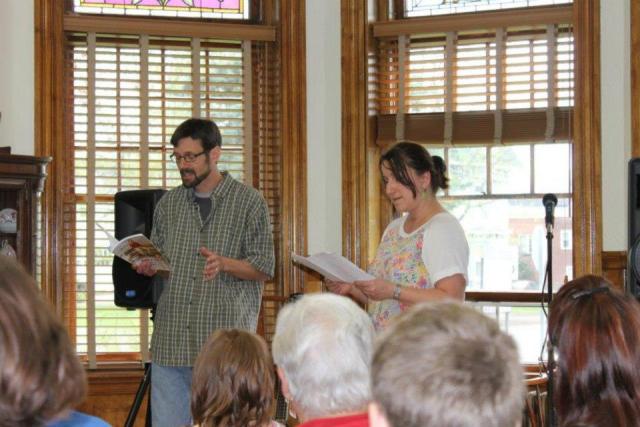 My friend Annie played the comic Canada Customs agent to my straight-man American. I didn’t realize it at the time, but we were on appropriate sides of the border line. 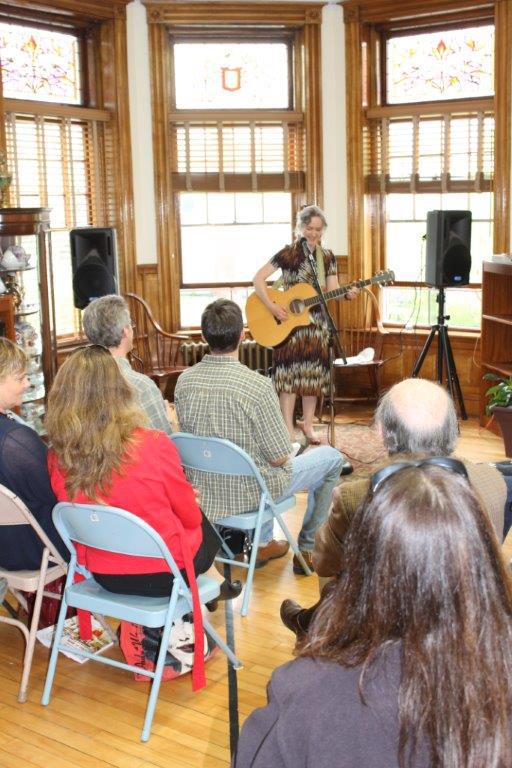 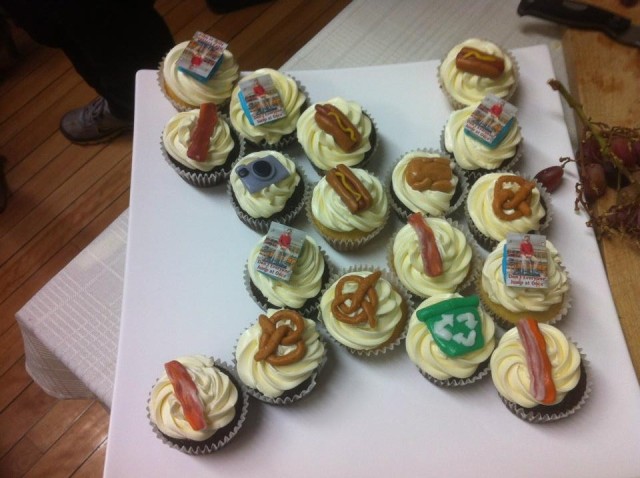 And these are the cupcakes that Annie made. 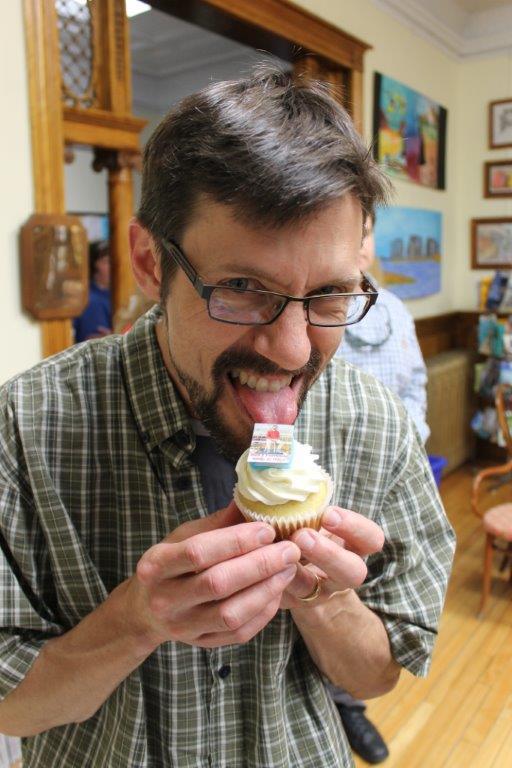 And this is the cupcake that Ross ate.

All photos Media Trois Canon.
*This was completely ungracious of me and not entirely true. I did, in fact, enjoy a morning cup of tea with my wonderful, generous host who is an all-around good bloke and undeserving of any aspersions that spew forth from my self-loathing.

I'm Canadian so I pronounce it "Aboot." No, I don't! I don't know any Canadian who says "aboot." Damnable lies! But I do know this Canadian is all about humour (with a U) and satire. Come by. I don't bite, or as we Canadians say, "beet."
View all posts by rossmurray1 →
This entry was posted in Reading? Ugh! and tagged anxiety, book signing, books, border, Canada, Customs, Don't Everyone Jump At Once, Haskell Free Library, reading, Ross Murray, USA. Bookmark the permalink.

Prostate cancer affects 1 in 8 white men but 1 in 3 black men. Every hour a man dies of Prostate cancer and it is the most common cancer in the UK. I wanted a detailed, warts and all account of prostate cancer and it's effects, so I could make my own decisions. I could not find one, so I decided to write my own. I am now Trying to educate men, one small step at a time.