So what is creativity? It’s hard to say (especially with a mouth full of marshmallows) but I know creativity when I see it. But what if you can’t see your creativity because it’s camouflaged? What if your creativity has undergone radical facial reconstruction so that it resembles a campy film version of that show you used to like in the 80s?

Sometimes creativity plays hard to get and needs a little coaxing. It might even need to be taken down with a tranquilizer dart. Where can you purchase tranquilizer darts? Let’s save that impertinent question for another time and focus on the creativity, shall we?

Here then are several ways to tap into your creativity – which I guess means creativity is kind of like a tap after all. And that brings me to my first point: location, location, location. No, wait, that refers to checking your moles. Revise, revise, revise. Your first draft is bound to be awful. Blech. It’s so terrible, in fact, you’re probably questioning whether you have any talent at all. And, in truth, you probably don’t. But does that mean you should give up? Again, probably. But you won’t because creativity is a cruel mistress and a part-time hypnotist and once saved you from a burning building and now, well, you’re beholden. You’re Beholden Caulfield.

So do the work no matter how painful and sooty and then revise and revise again. Did you know, for example, that the original lyrics to John Lennon’s “Imagine” went like this? 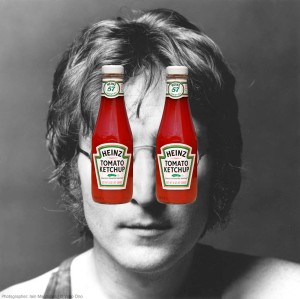 When he failed to find a restaurant willing to use the song to sell fast food, Lennon revised the lyrics to sell simplistic, dime-store philosophy instead. And the rest is overplayed history.

But you can’t be creative without an idea in the first place, just like you can’t kill a werewolf without a silver lining.

One of the best ways to come up with an idea is to steal someone else’s. If this makes you uncomfortable, maybe you should just give up being an artist and become an accountant or a werewolf slayer instead, Mr. Conformist McSquaresville.

Another way to come up with an idea is to put your thinking beret on and go for a walk in the deep woods. No, deeper. A little bit deeper. Yes, that’s it, right there. Now empty your mind. Also empty your pockets because there’s a mugger in the woods. Creativity is risky business.

But that mugger not only took your wallet and your cell phone, he also unburdened you of all your… burdens and other… burdeny things, opening your mind to new thoughts and hopefully a broader vocabulary.

Still another technique is to imagine your own funeral. What are people saying about you? “He never did create that very creative thing or even invest in a good thesaurus,” they’re saying. “What a waste.” Is that what you want? Well, is it? Of course not, so stop moping about “being creatively blocked” and “hoping to eat a meal sometime soon” and get to the important creative work. Death is a terrific motivator. It’s the ultimate deadline.

Once you have your idea and the motivation and two or three scotches in your belly, the hard work begins. The creative process is part magic, part labour, part digestion. Sometimes the work will just flow out of you, sometimes you have to encourage it. For example, to channel her very deepest emotions, Stevie Nicks recorded “Gold Dust Woman” with a scarf covering her eyes. Sometimes I use this technique for my writing and I find it works zvoiu aoufoya a89,t[;t;wp

I hope you find these tips helpful. If I can leave you with one thing, it’s that “creativity” and “desperation” have one thing in common: they are both words.

I'm Canadian so I pronounce it "Aboot." No, I don't! I don't know any Canadian who says "aboot." Damnable lies! But I do know this Canadian is all about humour (with a U) and satire. Come by. I don't bite, or as we Canadians say, "beet."
View all posts by rossmurray1 →
This entry was posted in Writing and tagged art, creative life, creativity, humor, Imagine, John Lennon, parody, satire, tips for creativity, writer's block, writing. Bookmark the permalink.

58 Responses to Creativi-Tips are like Q-Tips for your brain!