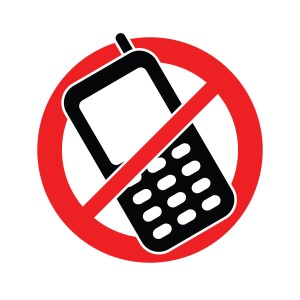 An acquaintance reacted to news that I don’t own a cell phone with the combination of ridicule and disbelief normally reserved for people who vote for the Green Party.

“You must have a cell phone,” he said.

“No, I honestly don’t,” I replied, and my tone wavered as it always does on this matter between self-righteousness and embarrassment.

“But you work in communications!”

True, but I’m also a big fan of irony.

We were on the telephone. Well, I was on a telephone, one with a chord and solid buttons to push, a telephone whose sole function was to be a telephone. He was on a cell phone and was asking me to text him the coordinates of a third party. That’s when I baffled him with the news that I was stuck in 1995.

I was once offered a cell phone for work but resisted because then people would be able to find me all the time. And if they found me, they’d ask me to do things. And if I did things, they’d discover I’m not actually very good at those things. And then I’d be fired, at which point they’d take away my cell phone, so really what would be the point?

But now it’s beyond that. Now it’s partly a matter of being overwhelmed by choice. I go to the mall and every second kiosk is selling cell phones or cell phone plans or cell phone condos. Other kiosks are selling cell phone cases. The rest are hawking hats and mittens. Do people really go through so many mittens and hats that it warrants dedicated mall-based mitten-and-hat kiosks? Is there some correlation between cell phones and mittens and hats? Do cell phone buyers think, “Hmmm, I should get some mittens and a hat since I’m going to be standing stock still on the cold sidewalk and blocking pedestrian traffic while I break up with my boyfriend via Snapchat”?

I feel I’m too late for cell phones. We’re already up to iPhone 6 and I haven’t even worked my way through levels 1 through 5. At this point, cell phones are like that co-worker whose name I never learned and, well, there’s no way I can ask now! Instead, I just duck into a bathroom when I see cell phones coming.

But I know I could manage. I navigate through technology all the time and am actually pretty good at troubleshooting. I have my iPad (v.1), my laptop, my 8-year-old 2GB iPod. I survived Windows 8. I tweet. I could easily have a friend recommend a phone and a plan and would have my new phone figured out faster than you can write “Autocorrect slacks.”

But I continue to resist, and not just because I know I’ll get sucked into that world and bump into things.

I think it’s for the same reason I don’t want a GPS in my car telling me where to go. A GPS would be convenient and make driving to points unknown easier. And I wouldn’t get lost nearly as often, and let’s be quite frank, getting lost puts one’s patience and family relations to the test. The day I tried to drive through Calgary and missed it entirely was not a good day, although there’s really no reason now to rehash whether I was right or wasn’t wrong. The point is, getting lost can make you panicky and miserable.

But getting lost is also a reminder that strangeness is the essence of travel. You’re travelling in a foreign place and you must rely on your sense of direction, consult a map, risk wrong turns and near-misses with semi-trucks as you take that exit, take it NOW! Plus, you might find something amazing in that wrong turn, hopefully something amazing that won’t steal your hubcaps.

If ever there was unknown territory, it’s life. Going cell-free, being out of contact, not having every convenience at your fingertips all the time isn’t a bad way to remind yourself of the need for self-reliance. Going without technology reminds us what we need, not simply what we want.

Most of the time I don’t really need to speak, to text, to post photos of focaccia. Few things are that important that I need a cell phone. And if it really is important, I’ll simply keep doing what I’ve been doing all along: borrow someone else’s.

I'm Canadian so I pronounce it "Aboot." No, I don't! I don't know any Canadian who says "aboot." Damnable lies! But I do know this Canadian is all about humour (with a U) and satire. Come by. I don't bite, or as we Canadians say, "beet."
View all posts by rossmurray1 →
This entry was posted in It Really Did Happen! and tagged 1995, cell phones, GPS, humor, iPhone, let's get lost, life, Luddite, smug bastard, technology, That "Autocorrect slacks" joke doesn't really work..., travel. Bookmark the permalink.

58 Responses to The holdout