The Loneliness of the Bouncy-Castle Monitor 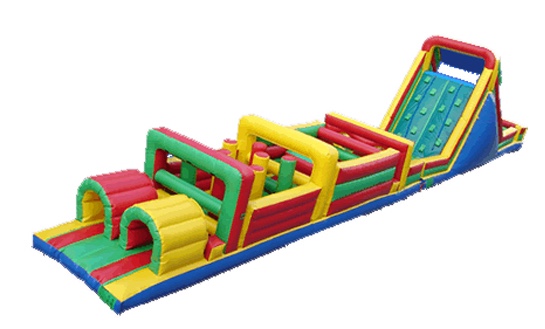 Imagine this, but with germs.

At one point, I’m quiet certain time began to flow in reverse. At very least it began to loop, roughly around the time that child I thought I’d seen the last of flung himself off the top of the bouncy slide down to the bouncy bottom, ricocheting into the bouncy retaining wall. But then, the mind plays tricks when you’re the bouncy-castle monitor.

Technically, it wasn’t a bouncy castle. It was a bouncy jungle-themed obstacle course that ended with a slide to the exit and terra firma (Latin for “Earth, she no bounce”). But “bouncy castle” is shorter and universally understood to mean “snot palace.”

It was one of two bouncy attractions at the festival. The other was a bouncy Spider Man. Question: were the children supposed to be inside Spider Man? If so, why are there punching bags in Spider Man’s gut? Do they represent streptococci? Is this an element of the Marvel Universe I’m simply not hip to?

These are just some of the things you have time to ponder when, like me and Deb, you spend roughly six hours monitoring the bouncy paraphernalia. (Nope, “bouncy castle” still sounds better.)

We volunteered for this. It wasn’t a punishment. There was no community service involved. We offered to monitor the bouncies for the event, thinking it wouldn’t be that hard. If no one lost consciousness, if no ambulances were called, then we could credit ourselves with a job well done.

But we forgot about kids. Kids… So many kids. Maybe not so many. It was really hard to tell. They kept looping around, bouncing, over and over. A relentless stream of kids. Running. Pushing. Tumbling in heaps. Surprisingly ferocious girls. Malleable but easily damaged toddlers. Pre-teen boys, all legs and pent-up aggression. Kids sliding down the slide. Kids climbing up the slide. Kids sliding down the slide while kids were climbing up the slide!

Deb and I could monitor only one bouncy at a time. While she was doing Spider Man  (excuse me?), I was on the obstacle course. At first it was overwhelming. There were clearly too many children at once. But how to limit them? If I went to the entrance to restrict access, the kids already in the bouncy would never exit because KIDS. NEVER. STOP. BOUNCING! If I went to the exit and told them to get out, they would just fill up at the entrance again.

I settled on the exit, where the slide was most likely to lead to tears and lawsuits. (Did I sign a waiver before beginning my monitoring duty? Did I show my bouncy-castle certification card? I did neither of those things.)

And that’s where I stayed for the next several hours, clearing kids to make room for more kids, warning Justin or Josh or Jason or Jeremy to stop pushing/kicking/growling. And that’s when time began to lose meaning.

The void of nothingness provided opportunity to ponder life’s mysteries, like: Are humans in essence good or evil? Is it in our nature to want to punch, kick, smash? Or is that just Jonah?

Or: When did I stop bouncing? As chaotic as it is, bouncing and sliding are clearly fun. Don’t forget to bounce. Wasn’t that a song by The Kinks?

Or: How serious do the tears have to be before I’m obliged to get a parent?

Or: What is that liquid running down the slide?

At one point, I had to de-clutter the mid-section of the obstacle course where some older boys were climbing over the sides. “Hey, you guys, you can’t be up there,” I said, just as one of the boys kicked backwards with his foot – right in my bouncy bits. So that made the time pass.

Eventually dusk fell, and we pulled the plug on the blowers. Don’t worry, no child was stranded in a sagging Spidey.

Then we had to roll them up, which is just like rolling up an air mattress except many times heavier. But we were left with a lot of bulges and lumps. (At least, I think no child was stranded…) And like an air mattress, I decided the best way to get the air out of the pockets was to lie down and steamroller it. So I did, rolling over and over the length of the flaccid bouncy. (My new nickname, FYI.) When I stood up, I was so dizzy I nearly passed out.

And that’s how I remembered why I no longer bounce. One mystery solved. Thanks, bouncy castle!

I'm Canadian so I pronounce it "Aboot." No, I don't! I don't know any Canadian who says "aboot." Damnable lies! But I do know this Canadian is all about humour (with a U) and satire. Come by. I don't bite, or as we Canadians say, "beet."
View all posts by rossmurray1 →
This entry was posted in It Really Did Happen! and tagged Bouncy castle, children, festivals, humor, kids, time. Bookmark the permalink.

16 Responses to The Loneliness of the Bouncy-Castle Monitor

The mud, the lotus and the pale golden blue.