What your sleep position says about you 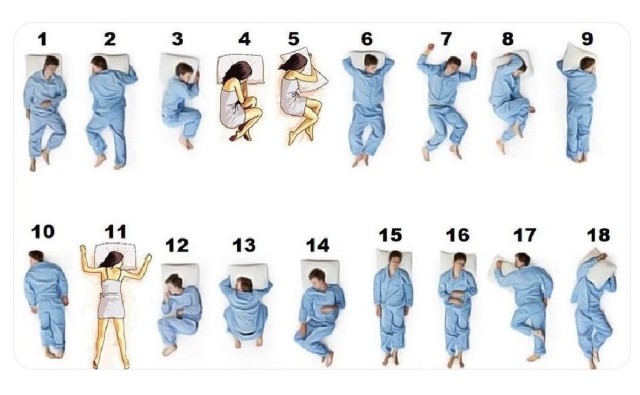 1. You are generous and fair, with the courage of a lion and the grace of a swan. You are thoughtful, inquisitive and a loving individual. Yet despite all your tremendous qualities, you are haunted by an emptiness because you have never been able to recapture that world-altering sense of awe you felt when you were five years old and realized your friends’ moms had first names.

2. Among your peer group, you are most likely to dress up as Ellen DeGeneres.

4. Sometimes while you are sleeping, you spontaneously change gender.

5. You will compose a jukebox musical based on the songs of The Clash about a wedding band that keeps hitting up the reception guests for free drinks; working title: Rock the Cash Bar.

6. You are embarrassed by your laptop log-in password but don’t know how to change it.

7. You have had your pillow stolen more times than you care to recall.

8. You’re not much of a morning person; people shouldn’t even try talking to you until your coffee’s kicked in, and that usually doesn’t happen until you get to work. It’s super busy at the office first thing, so maybe catch up later? Mid-morning is your most productive time, like, really in the zone. Lunch is “you time,” so people really need to respect your space. Who has energy to do anything between 1 and 4, am I right? On the commute home, that’s the only time you can listen to – I mean, really focus on – your music. In the evenings, you’re so exhausted you just want to veg in front of the TV. You describe yourself as a people person.

9. You don’t ask guests whether they want cream and sugar in their coffee, you just do it.

10. You own multiple cats and suspect they are responsible for the pillow thefts.

11. You have a theory that in the film The Breakfast Club, Vice-Principal Gleason is especially irritable during that Saturday morning detention because he has been dealing all week with a parent campaign to ban certain books from the curriculum, and that’s why you’ll notice there are no copies of Judy Blume’s Forever on the bookshelves of the school library!

12. After years of watching reruns, you know the first line of the “Friends” theme song is “So no one told you life was going to be this way [clap-clap-clap-clap],” but you’re not sure whether the second line is “The fish I caught the most turned out to be a ray” or “Your boss he thought the boat belonged to Michael Bay” or “An albatross’s coat, it just won’t fly away” or “Your opposite approach will sometimes be one-way” or “If no one mows the moat, it just might be like hay” or “You’re not supposed to choke on pasta bolognese” or “La bob bee-doe bee-dope, bee-bop-bop bee-doo-daaaay.”

13. You are shy but gentle and have had many conversations with amphibians.

15. Your idea of a pickup line is, “Hey, baby, how about you and me stimulate the economy…”

17. You will fall in love with a medical professional while having a painful, red swelling drained; abscess makes the heart grow fonder.

18. You think oxygen is overrated.

I'm Canadian so I pronounce it "Aboot." No, I don't! I don't know any Canadian who says "aboot." Damnable lies! But I do know this Canadian is all about humour (with a U) and satire. Come by. I don't bite, or as we Canadians say, "beet."
View all posts by rossmurray1 →
This entry was posted in Never Happened and tagged buzzfeed quiz, facebook quiz, humor, internet quizzes, parody, sleep positions, sleeping, twitter quiz, year of the cat. Bookmark the permalink.

29 Responses to What your sleep position says about you