Your Beard Will be Thicker; Your Skin Not So Much: A Letter to 17-Year-Old Me

First, thank you for keeping journals those last two years of high school. Decades later, these notebooks will help you recall things you’re going to forget, namely what a whiny, narcissistic yet cripplingly insecure drip you are.

For starters, you’re not in love. I repeat: you are not in love. You are having big, new feelings about girls in their mysterious 1980s wool sweaters. Calm down. Don’t be in such a rush. Stop writing poetry. To your credit, your desire for romance is rather sweet, as is your willingness to be content with heavy necking because, quite frankly, that’s all you can expect for quite a few years yet.

While we’re on the topic of girls, future you will remember the day in the cafeteria you tried this trick where you let a girl know you like her by staring at her with half-closed eyes. It really worked! What you’ll forget, 17-year-old me, is that it will take you two full months to finally ask that girl out. It won’t last, despite the heavy necking.

And don’t be so negative about women. It’s borderline misogynistic. The female species (as you like to say) are not conniving, manipulative and cavalier; that’s the human species in general.

Also, don’t lose hope. Love will come, and it will be more amazing than you can imagine. The pain will be greater too. Spoiler: some girls like skinny geeks! They even marry them!

But still, would it kill you to work out a bit?

Back to the poetry. I know you fancy yourself a serious writer but let’s play a game: which of the following are excerpts from your journal and which are lyrics from Taylor Swift’s latest album Folklore? (You’re going to hate Taylor Swift.)

A) This is the me that is really true/I’ve shown you me, now show me you
B) But now it’s over, I don’t exist/To you it’s like we never kissed
C) It’s hard to be at a party when I feel like an open wound
D) Hope never dies for the girl dressed in tears
E) I’m only seventeen, I don’t know anything/But I know I miss you*

So, yeah, keep having fun with language, but no poetry. The world will thank you.

Where’s everybody getting all the booze? There is a lot of underage drinking going on. Do your parents know about this?

In February, 1984, you write: “Happiness is discovering hair where you never knew you had it.” At middle age I can confirm: false.

On the whole, shaving is a drag.

As for the future, you will have four children. Imagine! So, yes, you will be poor.

You will also have cats. So many cats. They will disrupt your sleep every damn night, so good job now sleeping in as late as you can. In addition: you will spend a year referencing cats in every newspaper column you write.

You will write a newspaper column.

I wish I could tell you not to do something so you won’t get cancer but I don’t know what that is. Maybe don’t tear around in your father’s car so much.

Do a better job at maintaining friendships.

Finally, about the writing: I hate to break it to you but you won’t be a famous writer, certainly not like you expect. Look how your daily journal didn’t last past high school; you don’t have the discipline. Also talent.

But you also say in your journal that all you want to do is entertain people. As a writer, you will at least do that. Most of the time.

You have a good future ahead of you, 17-year-old me. So lighten up. Thankfully, you won’t always be such a drip.

Most of the time.

Set the Night on Fire, Briefly! An Oral History of the Perseid Meteor Shower

01:47:32 meteor: It’s funny, you know? No one ever said outright, “Let’s be the most brilliant meteor show in the night sky.” It just sort of happ—

END_OF_DOCUMENT_TOKEN_TO_BE_REPLACED

Tomatoes in waiting. Also, do you like our new kitchen colours?

It’s perhaps the most privileged, most tone-deaf thing to complain about, but here we are, and I’m going to say it: I have too many vegetables.

I imagine I’m not alone in thinking this. The people who brought you “Pandemic Bread Baker” later branched out with their spring production of “Hey Look: I Planted a Garden!” and now they are deep in rehearsals for their summer extravaganza: “Holy Crap! More Kale!”

I would like to say that it’s only gardening newbies who are surprised to learn that, when they plant seeds all at the same time, everything ripens at once, but I am surprised by this fact every year. And it’s not just the vegetables. Every July I sigh with satisfaction when our raspberries first come out. “Mmmm, gonna go eat me some raspberries,” I drool. Days later: “GOTTA EAT ALL RASPBERRIES!”

Luckily, we have only a modest garden in our backyard. I say “modest” because it’s much less harsh than saying “poorly managed with middling results.”
For instance, our burgeoning zucchini plant has been blossoming flower after flower this year. So far, though, it has produced a single zucchini. This is probably because most of the flowers are male. Without a female flower to pollinate, the male parts whither and fall off. Which reminds me, I’m due to write an update on life after prostate cancer. END_OF_DOCUMENT_TOKEN_TO_BE_REPLACED

How to dig a hole 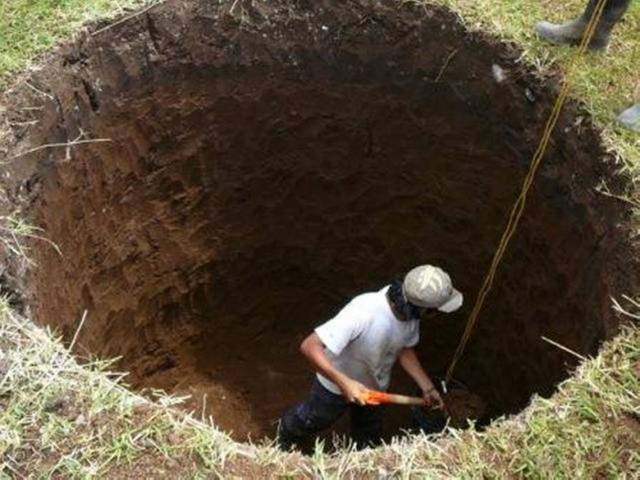 “I’m not very good at digging holes.” – Our daughter, explaining why she declined a request to dig a hole in the backyard for her mother’s new lavender plant.

The first thing you gotta know about digging holes is you can’t turn your back on them. Holes are crafty sons-of-guns, so you need to be alert all the time. Had a friend one time took his eye off a hole and it up and bit his foot clean off! Now, I’m not saying that’ll happen every time. Sometimes a hole’ll just give you a sharp flick or spread rumours about how you pee in neighbours’ bushes at night. But you can’t never tell with holes.

So if you can, have a spotter with you, someone who can keep an eyeball on what that hole is gettin’ up to while you focus on the digging and the whatnot. If you have a third person, even better, because then they can take care of the whatnot and, if time allows, the whozit. END_OF_DOCUMENT_TOKEN_TO_BE_REPLACED

The COVID Mask of Zorro!

Hola. My name is Don Rosseto de la Vista Cruza, as my father was before me but with hairier shoulders. To the people of los Muncipios del este, I am but a mild-mannered writer of pandemic pamphletos. I am particularly proud of that which depicts a miniature dog with the large bulging eyes who says, “Do Not Forget to Chihuahua-sh Your Hands!”

When I hand my preventive papers to the people, though, they laugh in my face. This is not good prevention. They say, “You are loco, señor. The pandemic has not come to our pueblos. It is only in the big cities. We will wash a little, but 20 seconds is too much time. You are a cute little burro but you will never have the shoulder hairs of your padre.”

Then they walk away from me only one metre apart, singing the Mexican folk song, “Tiene pantalones pequeños” (“He Has Little Pants”).

You would think that this would leave me to feel sad and bald-shouldered. Ha-ha-olé! Here you are mistaken, for while by day I am Don Rosseto de la Etc., by night I am usually sleeping. But by evening, I am…

It is a much shorter name, si? END_OF_DOCUMENT_TOKEN_TO_BE_REPLACED

The mud, the lotus and the pale golden blue.

Drinking Tips for Teens
Create a free website or blog at WordPress.com.